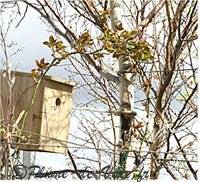 Nest at the end of the season. One un-hatched egg.

Install your nesting-boxes as soon as in the autumn, the birds will have time to get used and make a reservation for next spring. Claims of territories are done very early in the year.

Install the nesting boxes preferably with the entry-hole directed towards the raising sun. This is how ours is placed.

Do not hesitate to remove the old nest, in order to clean and disinfect the nesting box each year for the next autumn.

Layout of the nest-box with door

Dimensions are given in centimeters except for the diameter of the entry-hole: 26 millimeters for blue tits. This diameter depends on the species. For great tits it must be 32-34 millimeters.

Nest box is assembled in outdoor plywood (less expensive than marine plywood) 10 mm thick. All boards can be cut form an unique board 15 cm wide and a little more than 120 centimeters long. The dimensions of the floor depend on the thickness of the plywood. All boards are screwed and glued with outdoor white glue. All boards except the floor, which is just screwed as it must not be watertight in order to allow rain water to leak out of the box. Screws, hinges and snap lock are in brass to avoid rust.

The roof is inclined and  with eaves for increased protection.

The box is suspended by two aluminium brackets on the back.

This nest-box is slightly different from the 2006 one; the door spans all the front side.  Because of the nest thickness, the former half door did not allow to observe the nest.

The webcam is afixed under the roof.  In 2006 it was centered but the nest center was built near the back and all the videos where  poorly centered, and some images truncated.

Two webcams had been installed. One for IR (infrared) light and the other for visible light. Both can be oriented from outside in order to do not disturb the occupants.

A visible lighting (white LED) was added at the end of January.