Not yet ripe, nor bountiful the sunflower; but it pleases and the great tit which tried it with pleasure. It is not very well positioned for the photo but hey, I've let it grown where it planted itself. 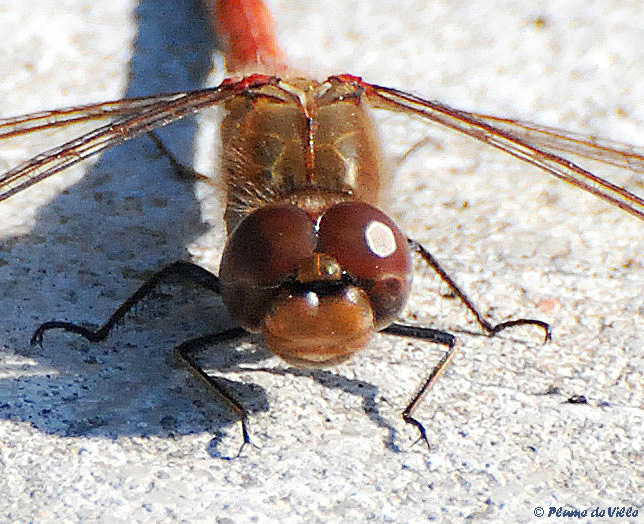 It is grey, cold, rainy, windy, just autumn for short.
And then, voila the sun, a Sympetrum (striped) big smile before you can see a new one next June.

We can still meet them until late October, but wait for sunshine. (September 26, Vincennes) 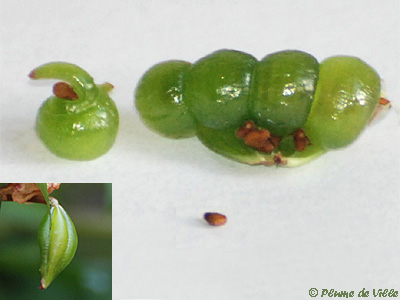 Autumn works on the balcony.

In my passage beside the impatiens, the mature impatiens capsule snaps at the slightest contact, projecting its seeds far from the plant.

I like to see snap the capsules when I pass.

The result? This strange twist, the capsule wrapped on itself.

The impatiens will reseed everywhere and particularly likes the substrate orchids. Seed stayed in pots, always germinate during the winter. Winter flowers granted. Attention to cut and remove them from time to time because the feet can become very big and bulky in the small pots of orchids. But the result is nice.


The sun on this Saturday prompted me to gardening. I removed most of the annuals, yet in bloom, but cool and even cold weather made me turn already the page of the summer. Cleaning, pruning, preparation pots for bulbs and pots that shall be protected this winter, as the newcomer of the year, leadwort. Rearrangement of pots. The sedums are still in bloom, and skimmias and small holly installed last fall and have provided a little colour in winter, are full of buds. It remains for me to visit the garden centres in search for additional plants that I will host this year for the autumn. I like to spend a lot of time choosing bulbs and plants. 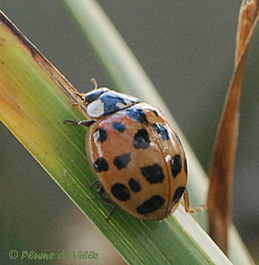 Disturbed by the bustle a Harlequin ladybird flies off.

At this time of year they look for a sheltered place to winter.

I've seen this year that some Harlequins on the balcony, no indigenous ones.
They continue their progression:   repartition  chart of the Observatoire Permanent, 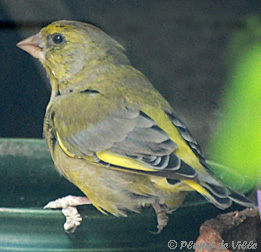 Just now, a dozen greenfinches flew in group in the garden. This is the time of gatherings.

They come often to drink on the balcony.

Yesterday evening around 18:30, return of great starlings flocks flying from one terrace to another. They were quite a lot last night.

The sunflower head is still not finished and blue and great tits visit it regularly.

In the newcomers series. 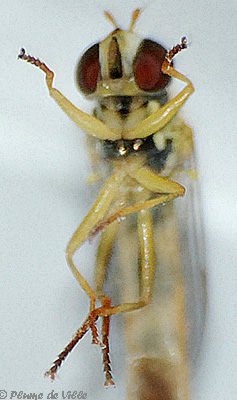 Called porte-plume (pen-holder) in French. The long male abdomen and drawing at the tip of its abdomen gave his name. The female has a wider abdomen. This Hoverfly is very common but this is the first time we see it.

A visitor in red livery. 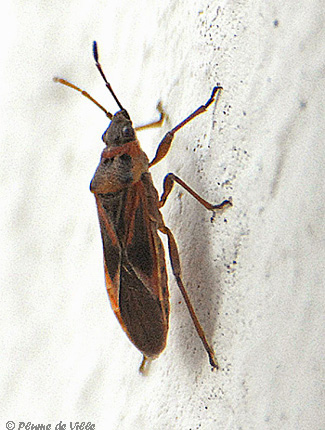 At first, I took it for a firebug but its colour is duller its spots are different.

It is a bug that lives under the bark or alder tree or plane tree.
(No, I haven't planted any of them on my balcony!)

In the series ... What happened to them? 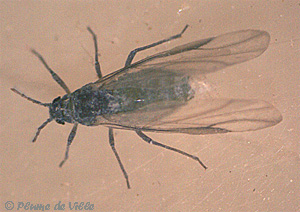 In early July I was interested in those spiral galls on our poplar.

A few days ago I picked up on the balcony, a yellow leaf of our poplar with its gall on the petiole and I returned inside to watch closely. I did not have the time to do it and I somehow forgot the leaf on the desk. 24 hours later it recalled itself to my attention! Sortie of the entire family of "Pemphigus spirothecae" in its autumn winged version ... and therefore visiting without concern their new (and warm) territory!

The body of aphids is 1.5 mm and 2.5 mm in full (including the wings). The picture is not very good, the lighting is poor. 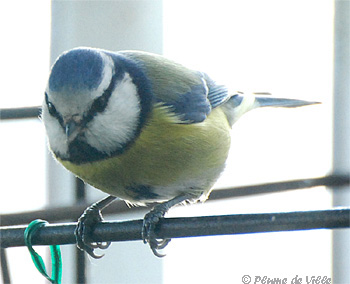 They were six of them together on Saturday morning! Hard to count all those jittering little yellow balls.

A gang of six, busily exploring the poplar (looking for aphids?) and chasing each other. 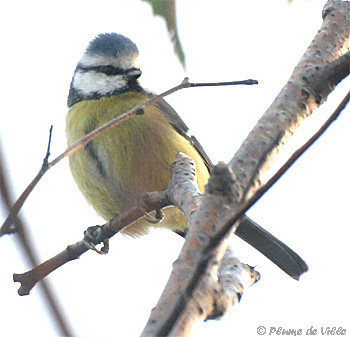 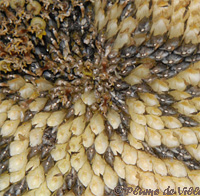 But a new round of seeds has matured, quickly found by the great tit which seems to like to reap them on the flower.

And when I say reap... it detaches each seed, look at it and drops it! Wasteful! Are the seeds too small for its liking? But it is not lost for the entire world: attentive sparrows wait below their lunch to be served. Curiously they never tried to help themselves. 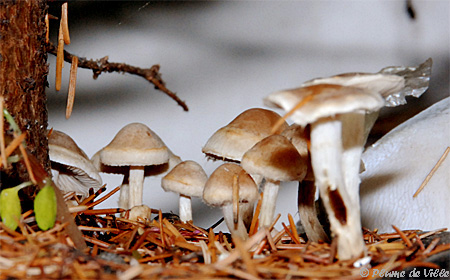 This is the mushrooms time.

Like last year, I have my little "harvest" under the tree. Well, just photographic harvest.

I still do not know which they are. I do not know enough about mushrooms, they are hard to identify.

[Talking about mushrooms, every year, I attend at this season the mushrooms exhibitions. They are numerous at this time. This week, in Paris, from 15 to 19 October 2008, there is an exhibition of fresh mushrooms at the Parc Floral de Paris. You can take, touch, smell and even taste (well that's for you to decide) the samples gathered and identified by competent amateurs.] 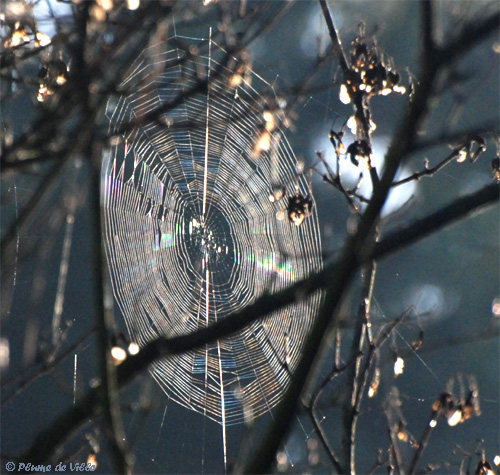 October and its fresh mists of early morning.

The owner must be still under the quilt, leaving us admire its iridescent canvas. 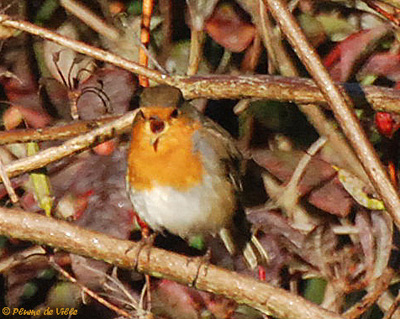 Robin sings, sings ... (well, it is normally the nightingale, but this one sang with all his heart...). 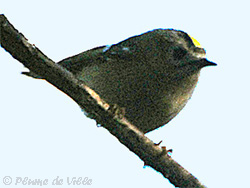 Chasing each other, never at rest, hidden in a large bush, just the time to see them crossing a lane from a bush to another. This one posed a split second.

The picture is very bad but this is the first time that I can have a semblance of its silhouette.

Many blue tits, great tits and 6 goldfinches to complete the picture of sparrows this morning. 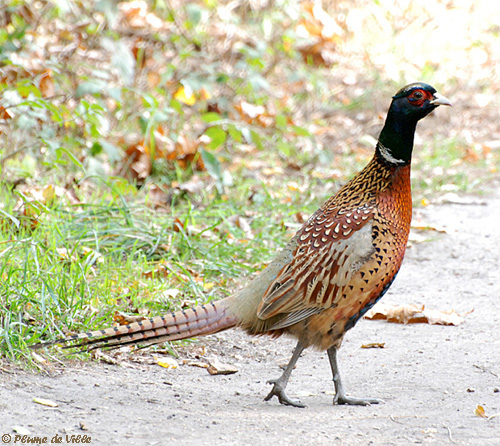 He walked quietly this afternoon, undisturbed by the biped, bicycles and dogs that enjoyed the autumnal sun in the Bois de Vincennes.

I hope that it will just keep its other lovely name of "faisan des bois" (Wood Pheasant)! 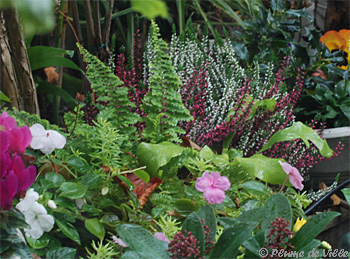 Autumn dress for the balcony. 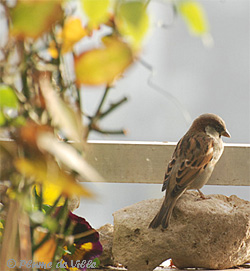 Last Thursday, a new race of sparrows. I could not see what species was the attacker because he stopped short before reaching the balcony. I saw him get away quickly.

Saturday while gardening, just above me perched what I take first for great tit because of its large black bib.

Less vivid colours, below more beige than yellow and smaller. For the first time, it is a coal tit visit. This is the time of migration and are more numerous at this time. It is, in any event, his first appearance on the terrace. 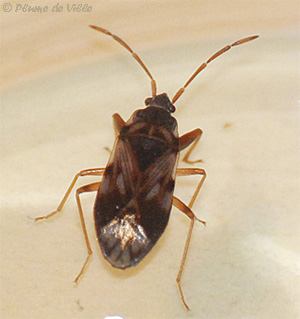 Sheltered in a pot of orchids that I take indoors, a bug, perhaps of the family of Anthocoridae (?), "flowers bugs" (and I stop here).

Predators, they prey on aphids, mealy bugs, thrips, and acarids.
They are about 4-5mm long.

You must explain everything!

This great tit showed us very successfully what she wanted and what we should do. She perched on a tree branch nearby, began to flutter above our heads, perched again, turning its head right and left looking at us. Then other grazing flights and it's done.

OK, they eventually understood! Ha! It's hazelnut, I like also sunflower seeds, you know ... promised for the next stroll.

This nice meeting happened during a stroll in the Parc de Sceaux.

[Near Paris (10km), park from late seventeenth century designed by Le Nôtre, is a large park of 1,8 km². Castle (from 19th, the castle of origin no longer exists), ponds and a beautiful wooded area (trees replanted since 1923, about fifty species are present) with protected natural areas and a very nice flora and fauna.]

Nest box: for the first time a blue tit hang on the door for a first glance. 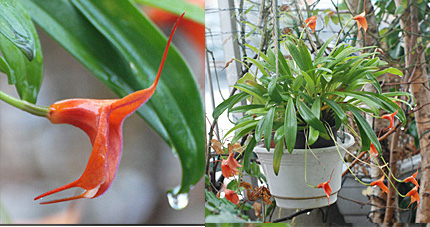 No picture, I was just besides to move the Masdevallia indoors! Decidedly, the tits seem to like gardening.

This beautiful miniature from tropical American is a good undergrowth orchid; it likes moisture and a fairly constant (12-18 °) cool temperature. For two months, as the weather is cooler, it was continuously covered with flowers and buttons. But few degrees over freezing expected for this week may be not enough for her and better enjoy it indoors. 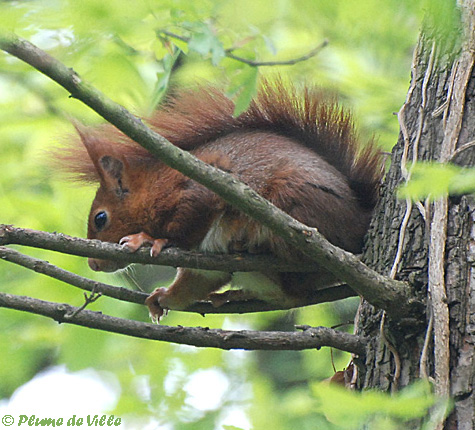 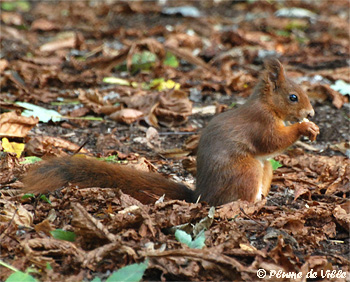 A little nibbling and the remaining is quickly hidden.

Most often without much research for a suitable site, usually a few paces away. Some minutes later, as if it had forgotten something, it returns to the hiding place, digs out the hazelnut and bury it a few steps further. The hole is not deep, it covers all with leaves. 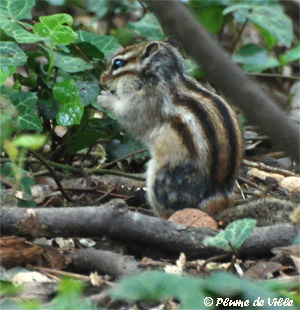 This is the Siberian Chipmunk. It also participates to the feast. But I suspect it of stealing already hidden goods. Curiously it is more shy, it doesn't approaches people.


Appreciated as a small pet, it has become almost common in suburban France forests. Released into the wild (again!), it adapted well and we see populations around large cities. 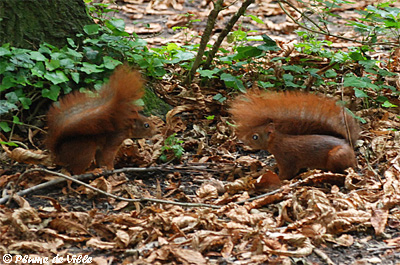 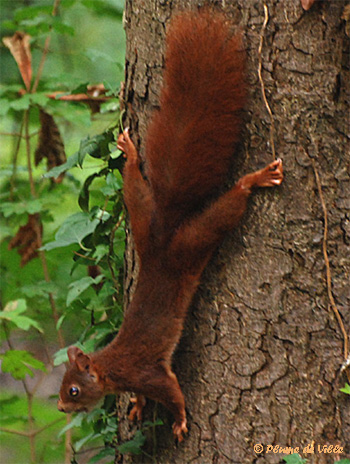 The squirrel is a loner on its territory. And meetings are often lively. Dressed tails, acute whinings, the two protagonists gauge the other, and then return quickly to their own business.

In alert, the squirrel flattens against the tree trunk as it stands, hung by its hind legs returned, it may flee at high speed in any direction, right and the left, up or down. 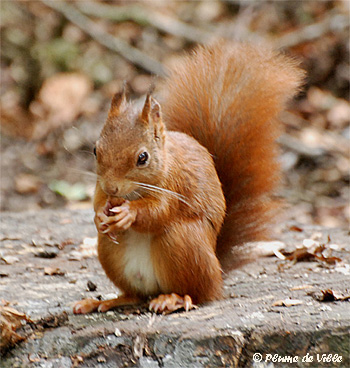 Still a last one.


Near threatened species.
In England it is rare, it is rivaled by the American grey squirrel.