[I wish to thank the Head of Parks of the BNF for her informations about the starling roost and the scaring.
Many thanks to Cyril Orliac, the falconer, for his explanations about the exciting falconry and the Harris hawk.]

STARLING ROOST OF THE GARDEN OF THE B.N.F. (Bibliothèque Nationale de France) 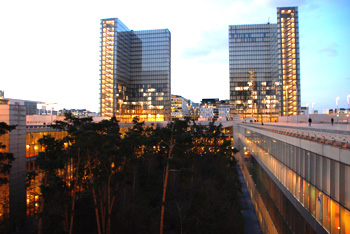 In 1994, 126 Scots pine adults (From the Bord forest in Normandy) were planted in the inner garden of almost one hectare, in the François Mitterrand site of the National Library of France. Much of them were broken by the 1999 storm.
Other species inhabit the garden as: pines, birches, charms, European rowan, hazelnut, aspen.

For more information: the BNF site. 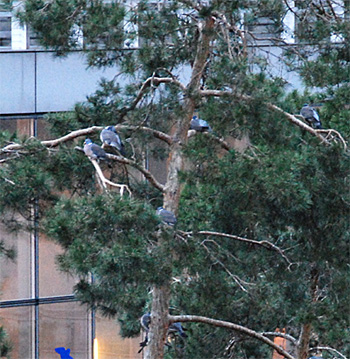 Sheltered from the wind between the four buildings, the garden please several birds, particularly wood pigeons and starlings, which come together here by the thousands during the winter. In early January we went to see the big starling flocks returning to roost 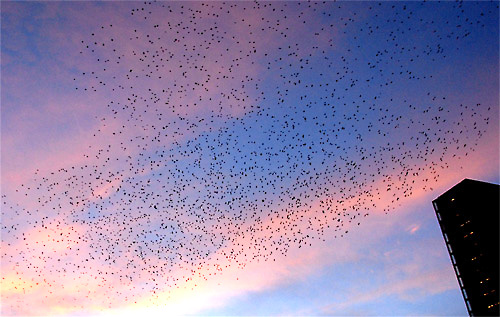 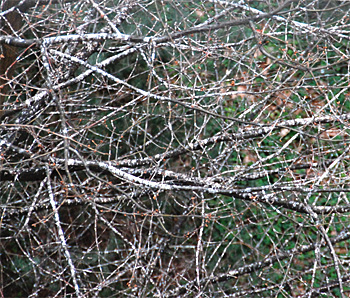 This year, the BNF has decided to again to ask the falconers to act. The Head of Parks of the BNF explained that the number of starlings this year has been very fluctuant. There was few of them in December and then their number has increased considerably hence its decision to deter them from continuing to occupy their dear dormitory.

The scaring operation took place on Monday and Tuesday 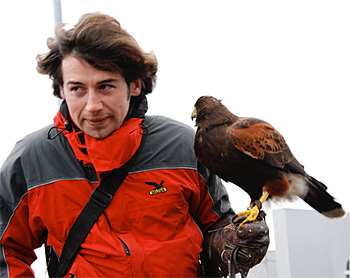 Not very hot that evening at the BNF in the strong wind and light rain. On the esplanade the wind blows hard. Some fearless dared brave the weather.

Here's Bonnie, Harris hawk and Cyril, his falconer.
The wind is not a problem for raptors sufficiently muscled and well-trained. These are not young birds.

Training of the bird takes about one year. 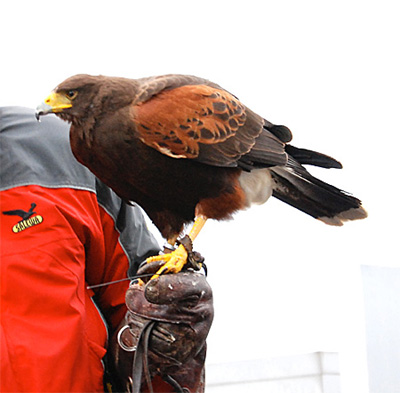 The Harris's Hawk [Parabuteo unicinctus] comes from the South-west of the United States.

One of its unique features is to live, raise their young and hunt in groups. The ideal group, having a well organised hierarchy, may count 5 birds around the alpha female and male.

It is chocolate brown and has white feathers at the base of the tail (it's known as white-rumped hawk). Her long legs are yellow. It measures 48 to 60 cm in height and 103 to 124 cm span.

It is a very sociable bird and is widely used by falconers.

We were able to approach it very near. 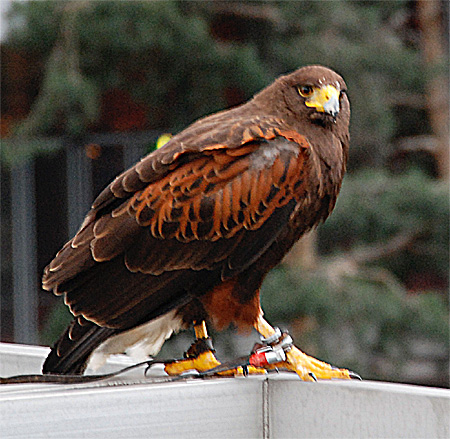 As soon as the hawk is sent it perched on the railing (those that the architect conceived to prevent us to see the garden!) along the inner garden of the BNF and remains attentive… to pigeons. The falconer says that they are its favourite dish. It is quickly remarked by the wood pigeons that fly immediately. The crows disturbed in their territory and make a big uproar. 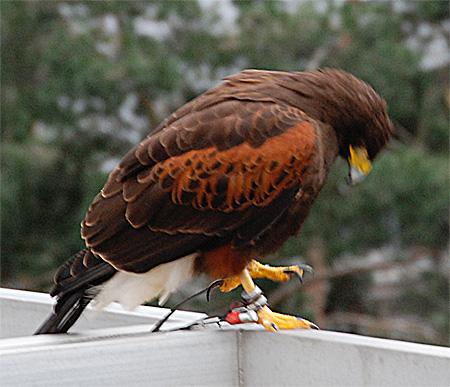 At the legs, in addition to the jesses, she carries a small radio transmitter, the little red cylinder that can be seen on the photo. It must be sufficiently lightweight so that she doesn't wants to pull it and even so, "you need negotiate".

This allows the falconer to locate the bird when lost of sight. This happened be the case in the garden of the BNF where it is very difficult to locate a dark bird in the dark, against the dark green pines. 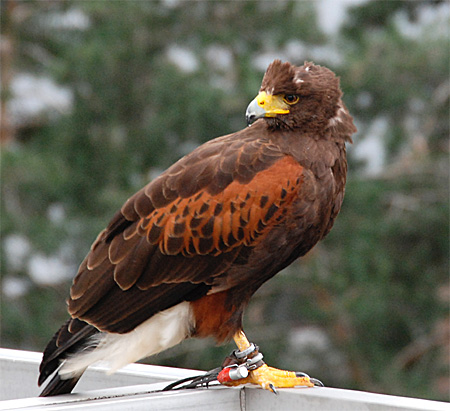 In France, falconry considers two types of practice. The "haut vol" (high flight) in which the falcon is already flying when the prey is detected. The falcon dives on the prey and kill it under the impact.

The "bas vol" (low fligh) is practiced with goshawks, Harris hawks or sparrowhakws. The bird is released when the game is detected and flies directly to the prey. 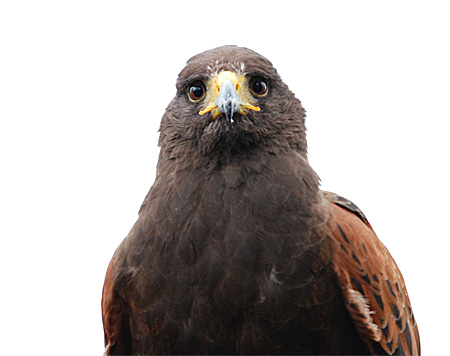 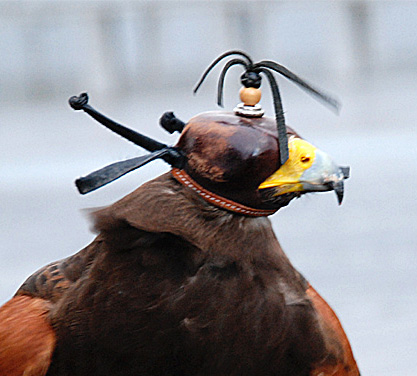 There are still few starlings at 18h.

So Bonnie waits under her hood. 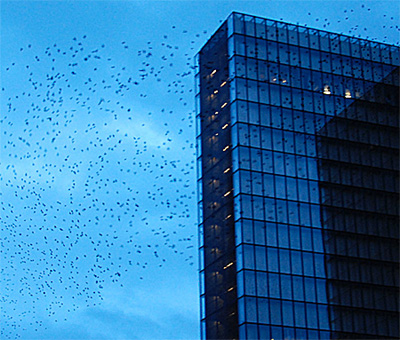 A big noise welcomes them. Noise rockets are launched and I assure you that the whistling is very dissuasive... even for us! The sound is impressive. And for the starlings? They fly away and come back.

The bulk of the troops arrive at about 18:45. There are many tonight. Long ribbons coming from the Parc de Bercy (on the opposite bank of the Seine River) and begin to turn to enter their roost. The Harris hawk is there.

They hesitate, resumed their flight. Despite the presence of the hawk, groups manage to settle. The hawk flies over the garden. 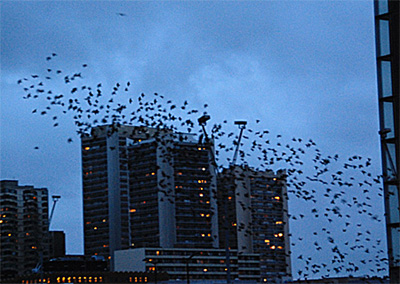 Clusters of starlings fly and settle.
Down in the garden, there are restless. 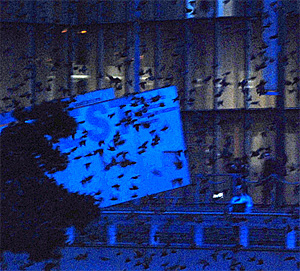 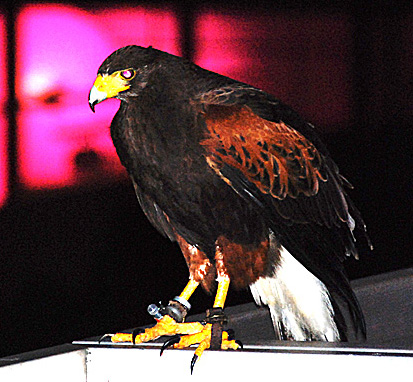 Many starlings left.
Calm reigns.
The wind has not subsided.
Well, shall we leave now?
It is 19:15.

Weather was bad yesterday, not much better today! Less wind but good showers.

It is 19h, the sky is overcast. It's very bleak. The photos will be pretty bad, the lighting is worse than yesterday.

Today they will be two. Bonnie is not alone, Clyde, younger, came to join. Indeed it is necessary that birds retain some "motivation". If Bonnie had dinned last night her interest would be lower today. 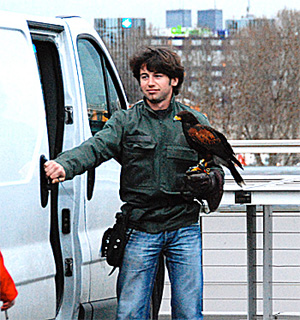 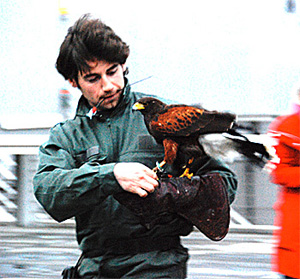 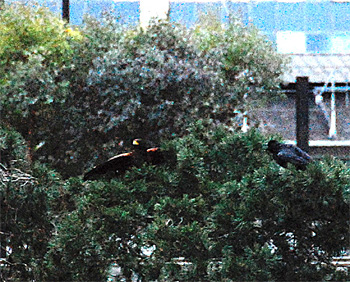 The crows vehemently protest at the arrival of Bonnie, which can be seen open winged on the pines. 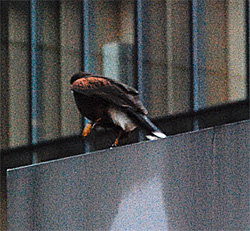 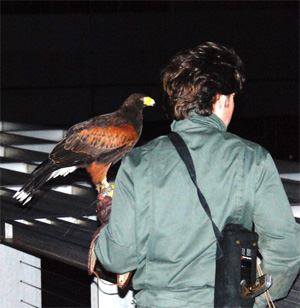 A few groups of starlings arrive. Much, much less than yesterday. There are no longer the long ribbons from Bercy but scattered small groups getting together. From 10000 (?) the day before, there are just a few thousands. 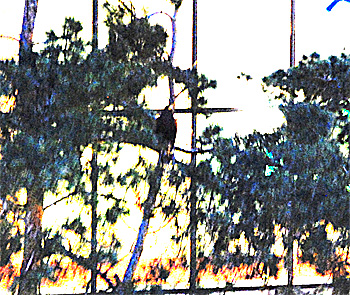 It's very bleak. The hawks are very difficult to see. Tracking hawks thanks to their emitters. On of them is visible in the pines. 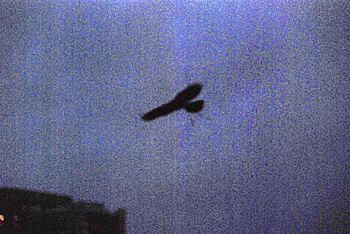 Clyde, him, went to do a little tour. He will eventually answer to calls and return.

Flying above the garden. 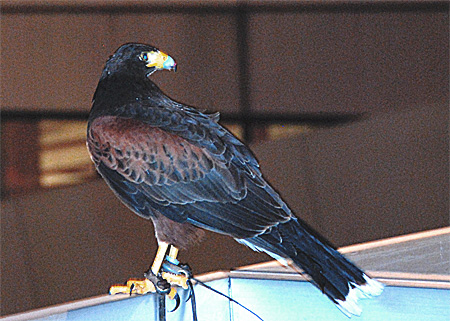 Starlings spend another bad night. I wonder where they went to install their new roost.