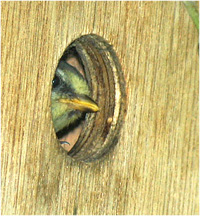 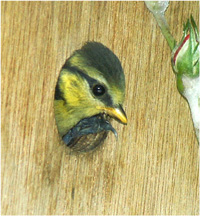 A small chick looks by the door. It is that the world? We see a small bill still surrounded by yellow, and the characteristic black mask, over a background of delicate feathers yellow pollen. At 9h17 and 9h20 new glance towards the large world. It's strange and a little scary, lets return in the safety of the nest and the brothers and sisters. 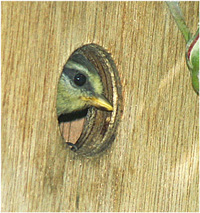 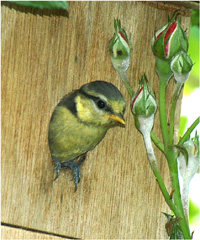 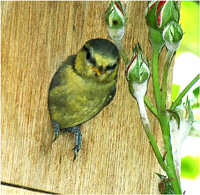 It is 9h25. It does not rain any more. The weather is rather hot. The parents, now a little drier, continue their coming and going. At 9h42, again a small masked head looks at the world. One minute later the youngster is always in the door frame. The mother is on a close branch and titits.
At 9h43 only the extremity of a small leg is visible. Shall we go back?
But not, curiosity must be strongest. A few seconds later he put out the head, clings in the opening with the legs. All the head is out.
Why stop in so good way, go on. One second later al the chest is out. Small Ti Ti tit to celebrate that and it launches out and is outside. It can already fly marvelously. But it was too much emotion; let's rest on the bignonia while waiting for the others. 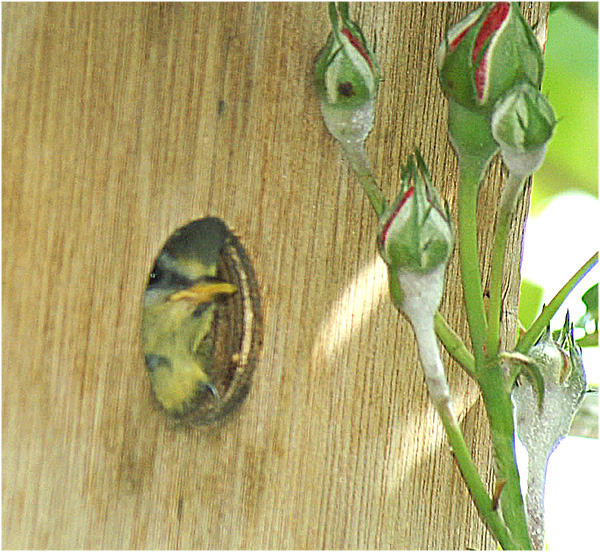 9h40: now it's my brother or my sister which looks through the entry, rests and then looks at  the right and at the left. 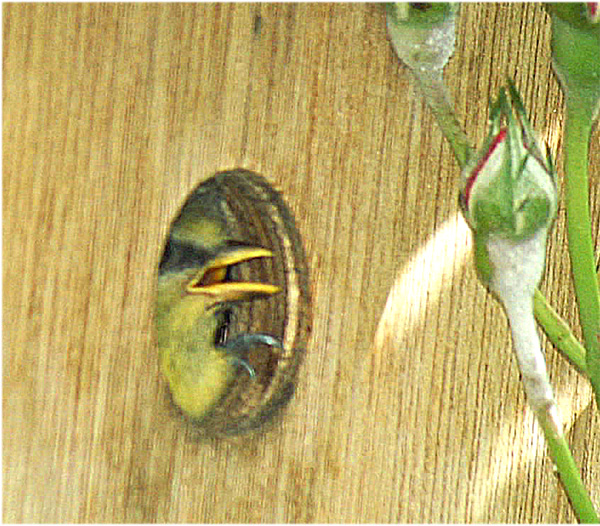 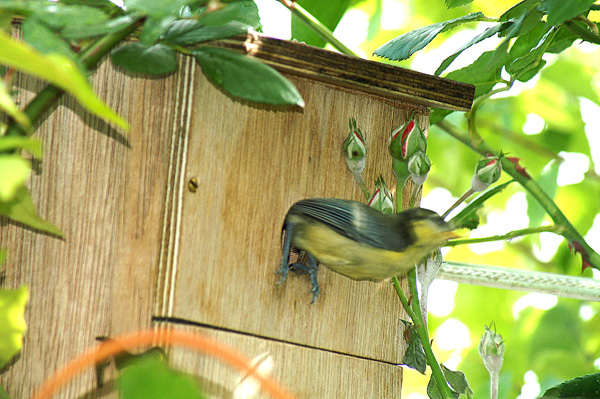 9h45: I am the next one, the second. I put out the head, dither; then, suddenly, I launch and land on the birch. On the parents favorite branch, where we often waited for them for the last two months. The white band helps to recognize the branch trough the telephoto lens. 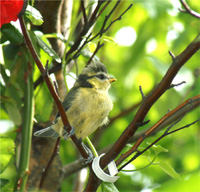 Me also, I will rest there a moment. 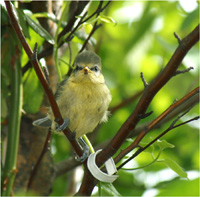 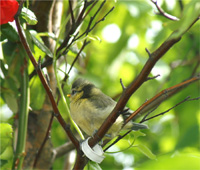 9h47: And then here are my other brothers and sisters, they do not hesitate any more. They will leave most quickly. 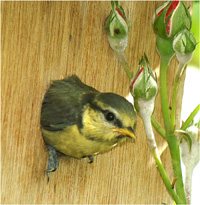 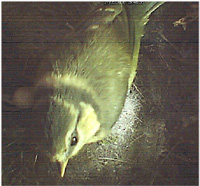 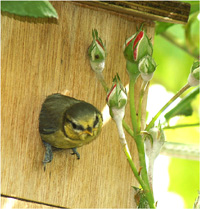 Me, the small last chick, I am alone now in the nest, with an un-hatched egg. Now it's my turn, let us go out!

Here we are, 9h48 we are all outside. Superb with our pollen colored chests, our back and wings delicately gray yellow and our small mask of blue tit.

We do not have yet the blue of our parents, the bill is still quite chick-yellow and we have large black eyes. But we know already how to fly and how to cling to a branch. We will remain all the 4 together, a few minutes on the willow.

The parents still call and call. They seem to be, my goodness! quite merry.

5 minutes later, they already leave us, to go up towards the next terrace. We hear them with their Ti throbbing Ti. The parents follow. We will still hear them during two hours, permanently, but without seeing them, they should not move and their colors mingle in the trees.

At the end of small 1/4 of an hour since our small band left, the parents come back again. Yes, but they fly directly to the nest, look by the door, seem disconcerted, nobody? where are they? He, like her, does the same carry-on two or three times. They seem astonished. Then resign themselves, no more chicks.

An image of the webcam will show that one of the titmice entered, with a billful and seems to seek in the nest, where nothing but one egg is any more visible. But where are they? My goodness! the titmice do not seem to know to count!


Finally they leave. They will return now from time to time. We hear them sing a little further.

The young birds will remain with their parents who will nourish them, still during month. Then the adventure will really start for each one, they will display their adult plumage in two months.

We will meet them now and again, in June we will see some small blue tits in visit. Then for a long period, no more tits (the weather is very hot in July, 35-38°).

At the beginning of August: the swift left. We receive regular visits of two small blue, which come together to benefit from last seeds of the catkin of birch. They have not the glittering livery of spring, but the cap is blue. Maybe they are "our"  tits? That will be fine.

At the end of August

At the end of august:

We remove the nesting box in order to clean and disinfect the nest.

The nest is more than 8 centimeters thick, moss, brushwood, straw and feathers.

The nest is off-centered and was made towards the rear of the box and provoked the centering problems of the webcam which we met.

The video images were truncated (the webcam, it, was centered!) and, as we did not want to disturb the inhabitants of the nesting box, we did not modify the camera aiming, this is why we do not present videos. For next spring, a system of adjustment is being studied.

The nesting box is hung up again in its place.

To the end of September

To the end of September:

More and more of blue tits visit the balcony, by twos or threes. Autumn arrival? They are splendid, gleaming feathers with blue. And they sing again.


The weather is still warm, but the birds approach the houses more and more.
Since the beginning of October, We meet regularly the blue tits. Often by twos.
We did not meet many great tits, curiously, before mid-November. Since, mid-November, a couple of great tits returns regularly.

The small blue tits will pass the head in the nesting box, they probably seek insects… or they remember?

Also the great tits, inspect the nesting box, in the hope that the entry is larger?

They all are very beautiful.