Cold winter and a long cold spell this year.


Then, for the birds, a small help is welcomed. In addition to seeds “special budgerigars” of our sparrow regulars, this year we hung grease balls, peanuts and sunflower seeds. After designing an “anti-nice-fusspot” feeder to prevent the bands of sparrows to monopolize the feeders, we saw a dozen blue tits and great tits simultaneously.

Light and nimble, they balance on a branch to shell sunflower seeds. The seed well fixed between the claws, they split it with the bill. The blue one shells the seed opening it along the seam, with small blows of bill. The great tit slaps the shells with all its forces with redoubled blows, like a woodpecker. One hears tac tac tac, the noise of the bill blows.

The winter is a difficult period, but in spring, for all these birds, the difficulty of the lodging arises: where to build a nest. Their favorable natural environments are diminished, even disappear: vegetable gardens, old orchards, wet meadows, hedges, thickets, waste lands, etc.

The old and large trees, where the birds used to find a hole appropriate to their nesting, are often destroyed.

Blue tits are mainly woodland birds but adapt well to urban environment.  As for most bird, favorable natural habitats shrink or disappear: vegetable gardens, old orchards, wet meadows, hedges, thickets, waste lands, etc.  Old trees, where they used to find appropriate cavities to nest, disappear.  In urban habitat, old buildings are facelifted, cavities in the façades are filled in and big old trees are replaced. It's not easy for the birds to find where to nest.   The problem to nest is as critical as that of food. 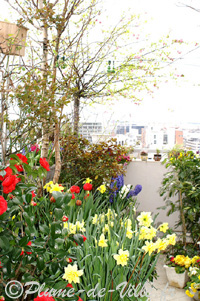 Then, after the snack, why not reserve a small nesting place for them? A nesting box which was accepted by a small couple of blue tits, which settled beside us during spring  for our greater pleasure.

The nesting box located at 2 meters of the french window, and the camera tripod in position. 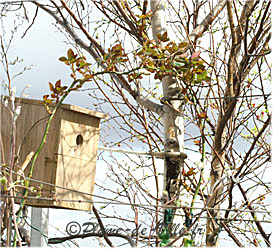 At the beginning of January we installed, for the first time, a “blue tits” nesting box  located at just two meters of the window with a door and an entry of 26 mm in diameter. In this nesting box a webcam was soon  installed.

January 6, surprise:  first visit of the nest by a blue tit. The visits will be repeated. 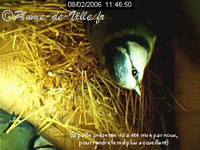 6 February: For two weeks a couple of blue tits has adopted the nesting  box.  After several visits, generally the morning, one, the other  or  both at the same time in the nest, we note that the house found its owners.  Madam must have found the housing to her taste.  It is she which chooses.

(The straw seen here in the nesting box, was placed by us, to make the nest more attractive!)

During all the month, every day, we observe several  passages in the nesting box, the female alone, or both. They turn, look at, inspect each place. If sunny days, the visits are more frequent.

He defends its territory firmly. And, my goodness! he lets it know. 9 to 12 grams of feathers and a strong character. It is not afraid to drive out the great tits much larger than him. A couple of great-tits, which comes every day, do it discreetly, when the blue ones are not there. But, they look at  the nest with envy. One of them tried  to enter on several occasions, it insisted much , but really the shoulders did not pass!

Even if no titmouse seems to be there, when I go on the terrace, I do not wait too long to see the new owner arrive. If my presence is a little too long, it starts to sing loudly, almost above me, raised tail, drawn up cap. And he ceases only when he driven out the intruder. Eventually, we arrived at a compromise, after a few times: I leave to him his terrace. He won. Satisfied he goes away… not very far, ready to return to dislodge the intruder.
.

Soon the construction of our nest will start… then