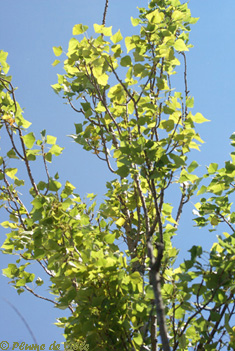 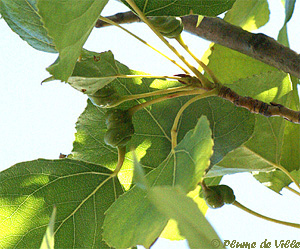 These outgrowths appearing all years on our poplar (poplar Italy), are spirals galls. Placed on the petiole of the leaf, they are the work of an insect, an aphid, Pemphigus spirothecae.

It is a modification of the plant following the attack of aphids that suck sap from the leaf, pricking the petiole. The plant is deformed and the stalk turns on itself. The spiral can turn right or left.

Installed and locked in the gall, the aphid (called "founder") gives birth by parthenogenesis, in June to a first generation of individuals without wings. Aphids exit through a passage when the gall dries and opens and leave the gall in August. Aphids take refuge in the bark of the tree. They lay eggs from which emerge male and female individuals.
After mating, in the winter, the females lay eggs in the bark (called winter eggs); hence the following year in spring, will born future founders of galls.

These insects responsible of galls are called gall-making insects. They may be aphids or small wasps like cynips or "gall fly or wasps" or flies. Some beetles and caterpillars may also be responsible for malformations.
Nematodes and mites can also create these deformations of which there are a variety of forms depending on the parasite, the attacked plant and the location of the attack.

There is no significant damage to the tree. 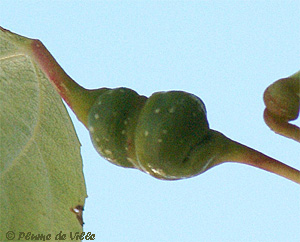 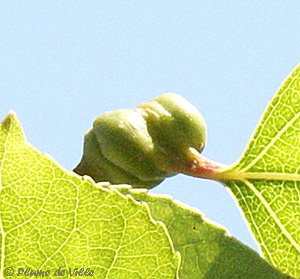 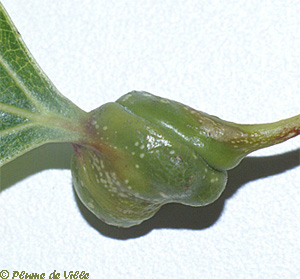 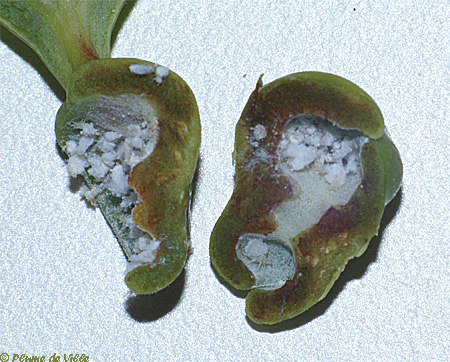 Gall inside the with its colony of aphids non-winged and "woolly". 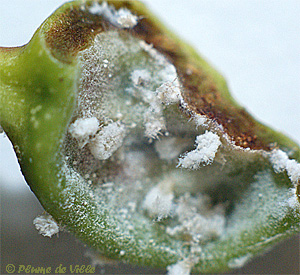 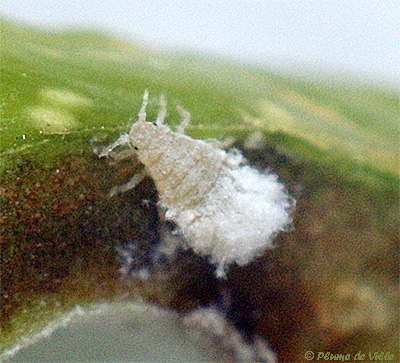 A more evolved individual which shows clearly the half of the body that has lost part of his "down". The size of aphids is approximately 1 mm. 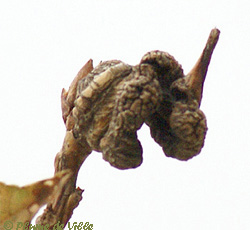 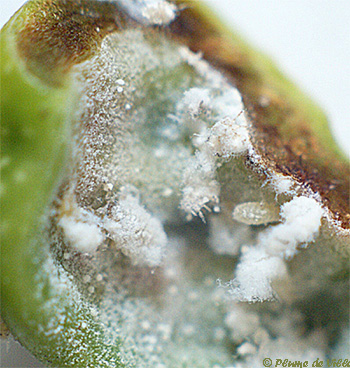 Previous year dried out and opened gall. The leaf has fallen and there is still the dried stalk. 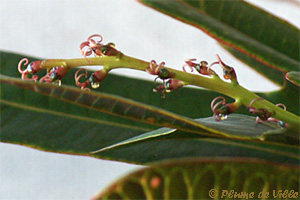 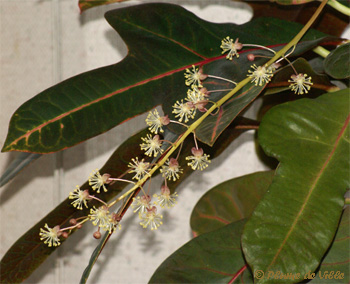 
A very classical plant, croton (Codiaeum variegatum) of the Euphorbia family, it lowers again every year, sometimes twice a year. Two types of long inflorescences appear on the plant (female and male), and emit a strong fragrance. These flowers are said "insignificant", but I found great elegance to these dense and light pompoms. 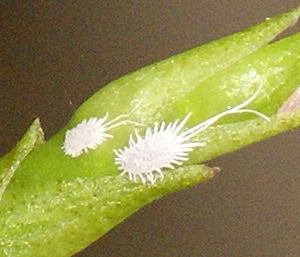 These small snow flakes of just a millimetre, mealybug (Pseudococcus), on a orchid sapling.

They're really strange with their long tail.
But it is better not to let them settle, protected by their shield they are difficult to convince to leave the plant. 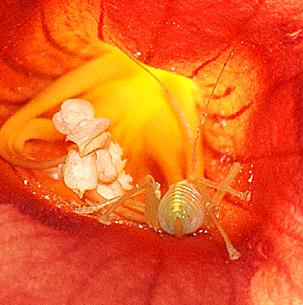 This young grasshopper plunged into the cornucopia (somewhat hellish!) of the bignonia flower, and has betrayed its presence by a sudden small downpour felled from the cone, which made me go to see the origin of this rain under a beautiful blue sky. The flower-filled water spilled its contents at its passage.

It antennas are disproportionately long: twice the size of its body of about 2 cm. 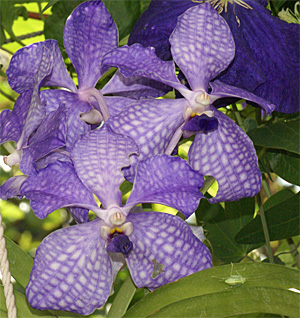 Disturbed, she took refuge on the green leaves of the vanda.

I hope this will not give it other gastronomic ideas.

Is it a Great Green Bush Cricket? Let it grow!


Few bird activities. Some sparrows, but all other seem have left.


As the years pass, unfortunately we encounter fewer and fewer butterflies, almost none diurnal. Some moths, as these two. 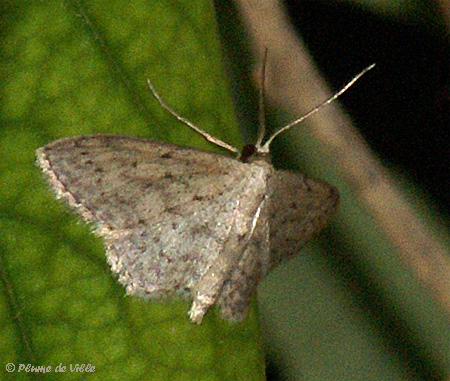 
Its caterpillar (loopers, spanworms, or inchworms) feeds on ivy (there are on the balcony) and so goes through the winter. 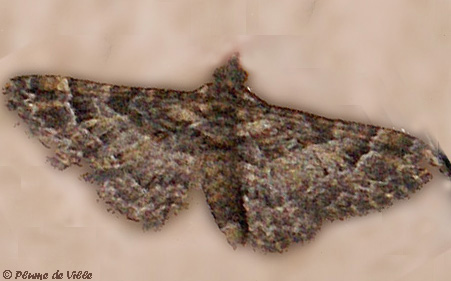 Another geometridae. Widely spread throughout Europe. It is often posed on walls, as I found this one. The caterpillar eats flowers, such as clematis (oh, oh) As the elder, honeysuckle, oregano ...
The species overwinters as a pupa.

If you find an identification error, please let me know, thank you. 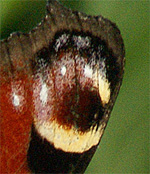 This beautiful butterfly is not on our balcony, even if I happened to have beautiful nettles, that its caterpillar likes especially, growing on a few square centimetres of soil.

Adult, it gathers nectar from plants like buddleia where he was kindly posed to allow us admire it.

Common in Europe, but for how long? To conserve it, let him have some nettles, the caterpillar eats them blithely and will take care of them, forget herbicides.

It is a Peacock, (Inachis io). Nymphalidae family. 5 cm

It overwinters at the adult stage. 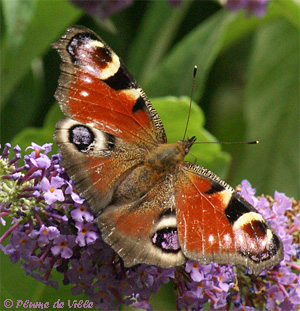 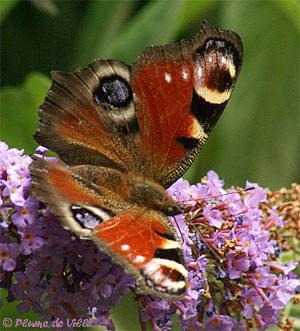