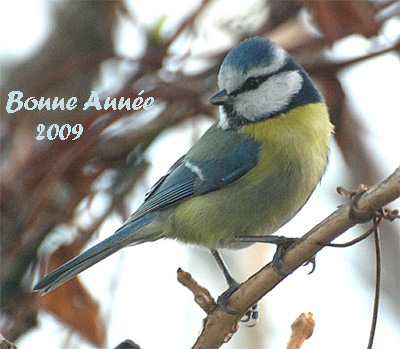 Happy New Year to you and thanks a lot for your visits.


Sorry, not yet translated. Translation in progress!

It's cold (-2 °C this morning) and grey with little snow showers.
Beautiful blue sky in the afternoon. 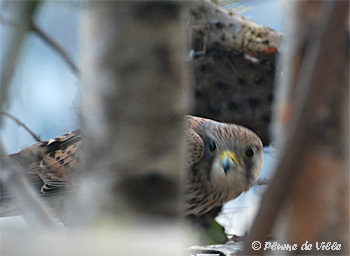 It landed silently on a window box.
At the same time all the sparrows dived under the cover of plants.

It is half hidden behind the trunk of the birch tree, but when I saw him it was not the the time to move to get a better view! 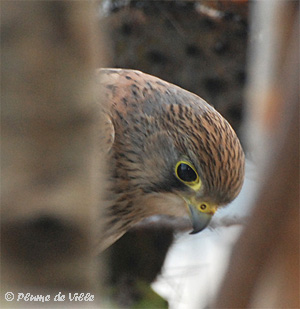 Here it is the visitor, that I see three or four times a year, without ever having been able to photograph it. In early December I had briefly seen land a moment and take off immediately.

Brown clear, his head is dark brown striped. Its wings are clear brick-red with brown spots.

Finally it is Madame, I think. With a small doubt, because the young immature (unlikely at this time of year) are very similar to the female. We can see a few grey feathers on the head of this one.

I could not see the characteristic large black bar on the tail or the pattern of the chest.

Mr has a dark head, with a blue-grey tint. 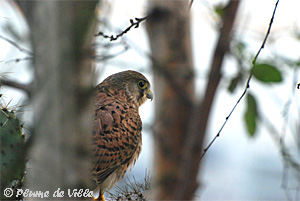 He conceded two photos on its window box and then, nonchalantly, he moved and landed on the rail of the balcony, where he could see better.

But not me! Harder for the photo. 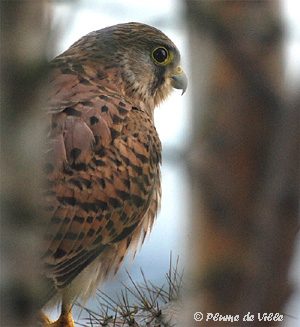 This is the first time that I see one so close for so long and it is amazing how small it is. When I saw it flying, I thought it was bigger. But it is smaller than wood-pigeons that often roost in the same place. It is the size of a rock-pigeon. 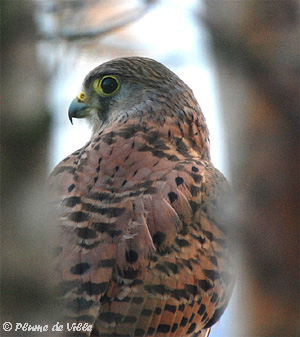 I would have liked to see it whole, but the trees hid it partially all the time. And even if it seemed very comfortable and very quiet, I did not dare move and even less open the window.

He remained there, calm, turning the head, inspecting the surroundings. 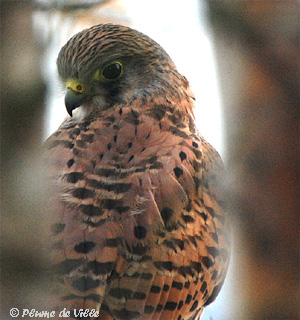 Yellow legs, eye surrounded by light yellow as the cere of its grey beak. 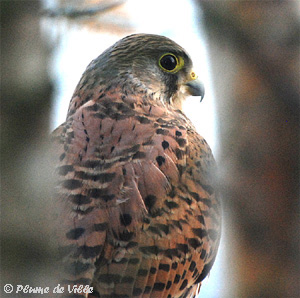 Then, slowly it spread its wings and flew down the building, gliding.
In all, it remained only one minute on the balcony.


Complete silence of the birds in its presence, the sparrows remained well hidden. I thought that they were gone, but after the departure of the kestrel, they came out one after the other from under the trees and fir. Obviously their defence is to hide where the hawk can not fly or enter among the branches the more dense and muddled. Of course it is the sparrows that attract the kestrel to visit the balcony, because even if it also feeds on mice and voles, sparrows are often on its menu in Paris.
But curiously, blue tits present (it is because of them that the camera was at hand and above all already with the good setting) remained at the top of the poplar, watching.

It is well represented in Paris, where they nest (forty-odd couples), among others, at the Chateau de Vincennes, Notre Dame and La Salpêtrière hospital.

Take a look at Cyril.

Brrr ... It is increasingly cold, -4 °C this morning under a sky who wonders whether it will be grey or blue.

Brawl in the nestbox. 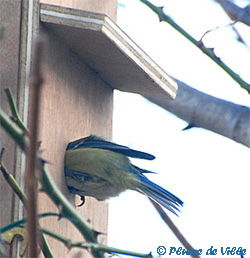 On 2 January, at about 11am, great! a blue tit decides to enter the nest box after a long time of passing the head at the door in the dance "I'll go, I wont go?".

I monitor the display of the camera to take a first video.
And at once I see two chickadees in the nest box. First, I think it is the entry of the female, very good; it is even better.

But the result will show me that I'm wrong.

A battle starts between the two blue. I would have preferred to show you, for a first video, a quiet entry into the nest box but a battle will rage. I reassured you that at the end the two fighters will fly away a little shattered and out of breath.

Fighting between two males or two females? I think two males because usually it is the male which looks for places to nest, likely to please the female. And you will see that one of the tits has a well-known head ...

It must be said that the fight is impressive. Seeing the violence of the fight, I almost would want to intervene. This would not be a good thing. The fight is normal for the possession and defence of a territory.
I often see altercations between sparrows, equally violent, but in a small nest box and close it's much more impressive. 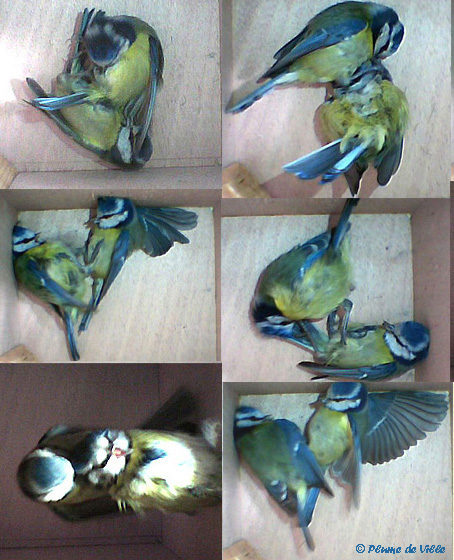 Three times a tit accepted defeat and tried to leave, but every time the other pulled it from the entrance to the nest box on the inside to resume the fight.

We see it in the next to last photo before at right. One was at the entrance, the other brings it back.

We saw it from outside the nest, partially out, trying to get out completely, and then suddenly pulled back.

Pricking, pinching, the blows pour and down
flies. 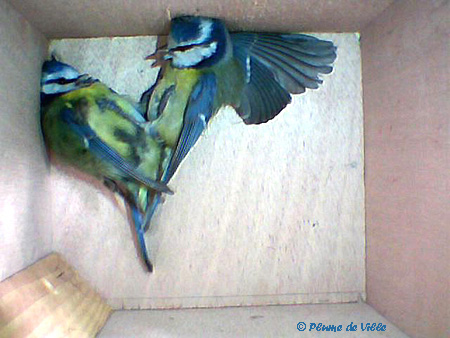 The battle lasted 2 long minutes.
Here are the pictures.


The lighting was set during the recording, which explains the colour change.

What do not distracted at all the combatants.

[This video includes the sound and images are those of an IP camera and not a webcam as in previous years. I planned to introduce the new facility only at first adoption of the nest box. I'll come back.] 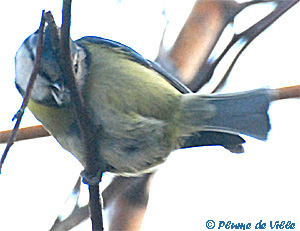 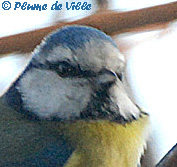 The loser finally manages to escape and fled immediately.

The winner remains in its territory and rejects a ball of feathers after the battle.

It is "blue eyebrow" who won, as seen on the small picture. I do not know if it was the first to enter the nest and was attacked or vice versa.

It will stay a long moment to recover and perhaps to savour its victory, placed on a birch branch. After a sunflower seed, it also left. There will be no other entry in the nest and we will not see them back that day.

I hope that the next video will be an entry of "blue eyebrow" with its belle!

Since then, no new entry, but regular inspections at the entrance that can be identified through the detection of movement as a change of lighting, as the entrance is masked and unmasked. 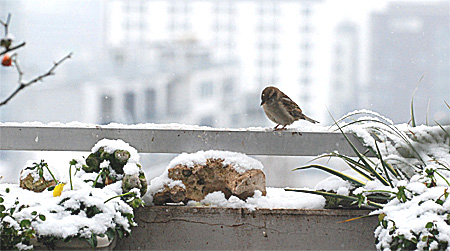 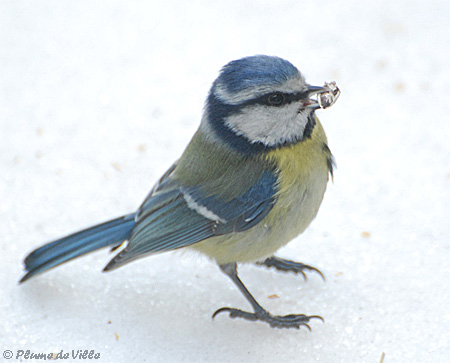 An entry this morning for the small blue, yes, always "blue eyebrow". 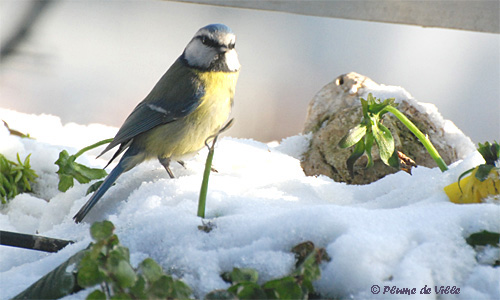 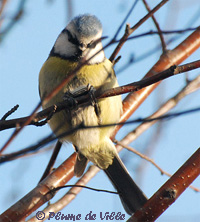 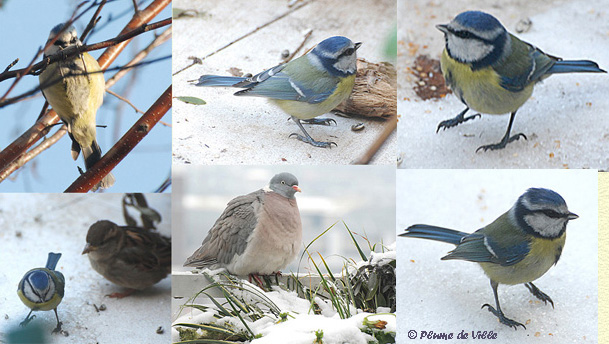 On the one with the sparrow, my watering can unfortunately sticks out, with a "beautiful" green spot. But I kept it because I love them so, a little pensive (actually, the sparrow is waiting to see what the tit will find) and we can see the difference in size of the two birds.

The kestrel did a passage at noon. We had a glimpse; the cry of a sparrow warned us. 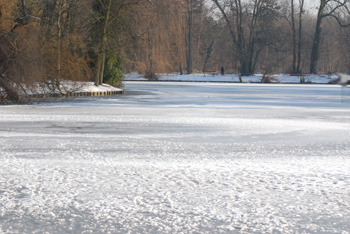 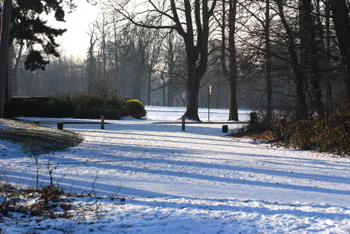 Let's enjoy for a time these landscapes of snow so rare in Paris. 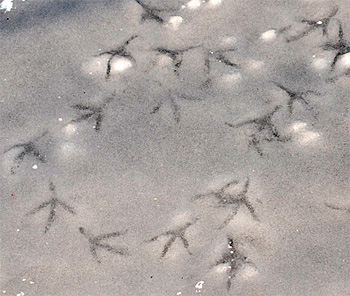 The snow remains frozen; the lakes are frozen (8 odd cm of ice). Freezing and thawing have kept the feet of moorhens and ducks carved between two layers of ice.
Guess which way she went! 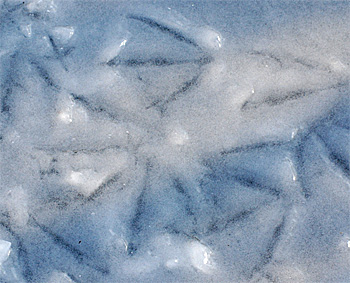 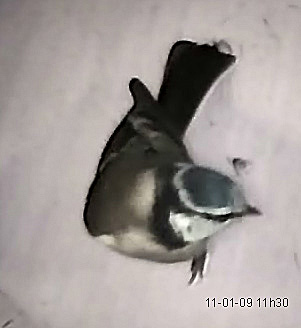 [[The video is not very colorful, I left the camera in IR.] 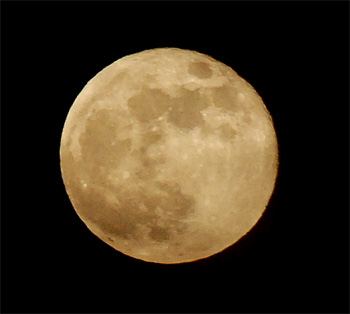 I learned it later, but I present you the largest full moon of the year, the largest and most luminous.

[Just to see what could be achieved with a so beautiful moon tonight!]