Blue sky after many dull, damp and cold days.

Few birds in recent days. Curiously, since it is cold tits are less present. Whole days without seeing one. Almost no one around the sunflower in the day.

Very early this morning return with the sun, of two blue tits and a coal. 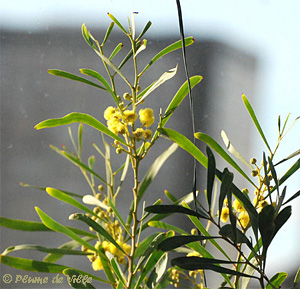 Originally from southern Australia, also know as Ever-blooming Wattle. It blooms all year but especially blossoms in spring and autumn. It is delicately scented.

Its leaves are not true leaves but phyllodes. This is the flattened petiole in the form of a persistent "leaf" and adapted to dry climates. 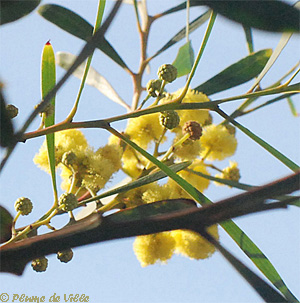 It likes a soil neither too dry nor too moist and tolerates calcareous soils.

It retains its flowers even in winter. Well, if there is not deep frost and the rain does not rust too much the inflorescences. It tolerates -5 ° to -8 degrees.

Last year it was still in bloom at Christmas.

Little activity in the balcony. Two blue tits passed early this morning when it was still dark.

So here's a little tits meeting in late November.

A Marsh tit and a Great tit.

On its branch the Marsh tit inspects the lane.

On the nearby tree a great tit observes it.

The Marsh tit goes down to pick up the piece she spotted and flies to the nearest tree to relish it. 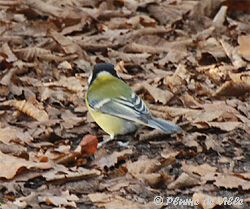 ... and the great tit went down and landed at the place that the Marsh just quitted, to inspect the surroundings. 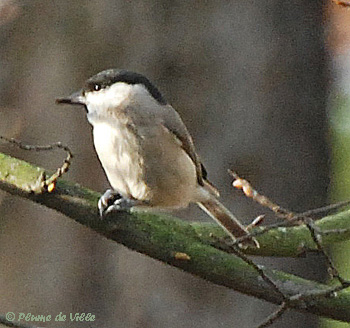 The Marsh tit sets to open and enjoy its taking (possibly beech seeds), she holds firmly in his claws.
Then its meal finished, it goes down looking for another piece.


This little game attracted our attention because it happened repeatedly. Every time the great tit came to examine the place where the Marsh had found something!

A coincidence perhaps, but the recurrence puzzles.
The Marsh tit use to hide quantities of seeds. This behaviour happens not only in winter but all year around. It has many caches on its territory from which it seldom goes far away.

Then the Great tit would have spotted the caches of the Marsh tit?

Examples of other observers, the sparrows from the balcony are very watchful when a tit which can easily peel a sunflower seed. They wait and try to make it drop its catch. 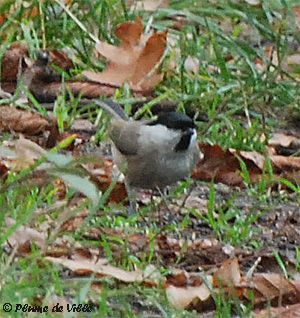 
The top of its head is black to the neck. It belly is grey beige.

A small characteristic black bib under the chin.

Seldom alone. When you see one, it partner or companion is not far away.

Couples (there are not plumage differences between male and female) stay together are said even in winter. They were inseparable and their union long lasting. That day, they were also two feeding under the eyes of the great tit.


I said at the beginning, few birds; but here in the late morning, a blue tit indicating its presence with a few happy titit-tit and just stuck his head through the entrance to the nest. First time in this late fall.

In the afternoon it even greyer, it falls very wet snow. Two blue and two great tits spend a good time at the sunflower feeder under the snowy rain. 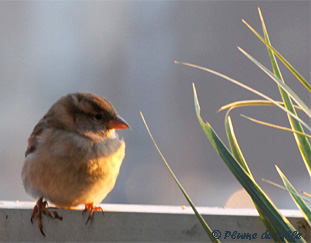 But the sun is here in the morning.

There have been a lot of days that I didn't saw the sparrows looking the sunrise at their usual place. 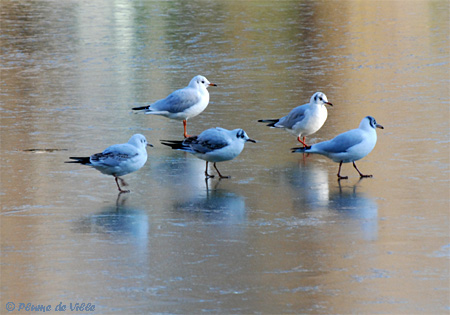 Small crossing this afternoon, of a nearby park to see that a thin layer of ice covers the water.

Black-headed Gulls which which lost their cap in winter and have just a small black spot behind the eye. 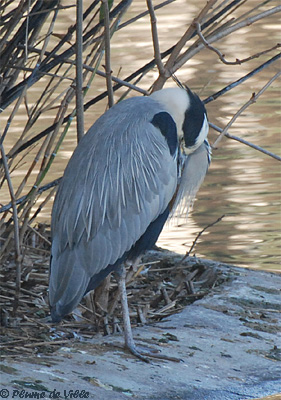 The grey heron sleeps in the shade under a beautiful blue grey duvet. 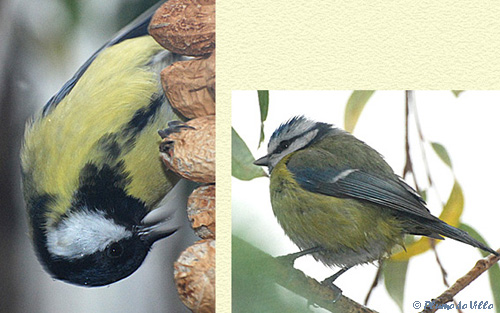 Monday the small visitors were wet under the snow showers.

The light was not very good, neither the pictures!

At the moment we very seldom see them.
Not a lot of birds also in the park.


8:15 passage of a small blue under an all grey sky. It is cold this morning and it freezes, no wind or rain 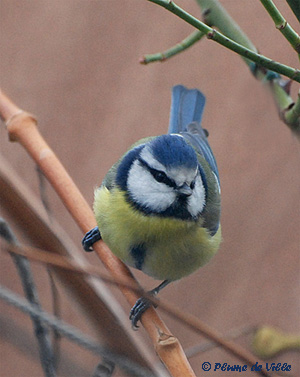 In early afternoon, they are all there and remain long time on the balcony. This is really pleasant to see them again.

Each one its preferences, the blue prefers sunflower, the great tastes the fat ball recently installed. 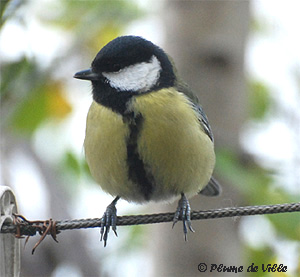 And of course when they are together, there are sometimes arguments. The blue charges the great tit several times. The toughest is the smallest, the blue, who owns and defends his territory without being daunted. 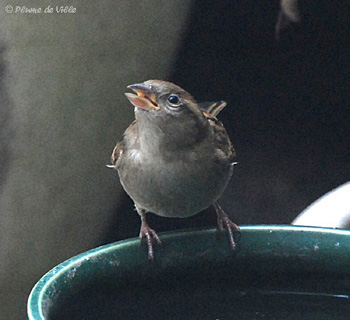 For me, a good cool sip!

Very cold weather, -1°C in the morning. We must break the ice in the trough and add hot water.
Rain and snow. A blue tit passed several times today.


5°C this morning, it is uniformly grey under the rain.

The blue tit returns and remains long time on the balcony. It will explore everything.
And it sings. Of course it is not yet the songs of spring but a muted voice lower-pitched than the spring tit-itit. 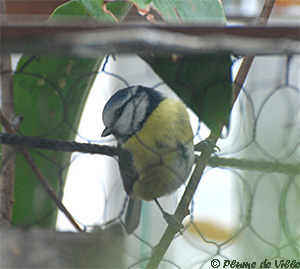 A small tour at sunflower feeder. A careful inspection of future buds of the birch. Hey! do not eat all before fine days! 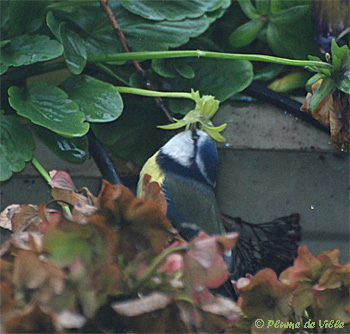 A small detour by the pansies fruits containing small seeds.

Finally, I think that it the seeds witch interest it, unlikely that it is an insect.

I have also seen the Sparrows peck pansies fruits. 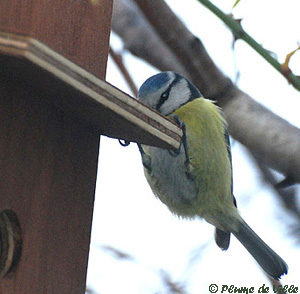 And today, inquisitive, it has just explored the entrance to the nest. 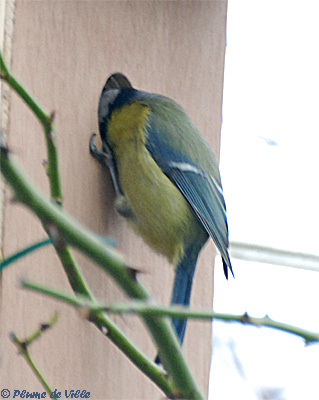 We often see it. And it will occasionally stick his head in the nest. Another blue tit meets it sometimes. Hard to say for a couple or not, because one of them pursuits the other and one of the two eventually leave. As for the attitude of the prosecutor tit, wings unfolded and lowered and arched back, it is rather a deterrent attitude. 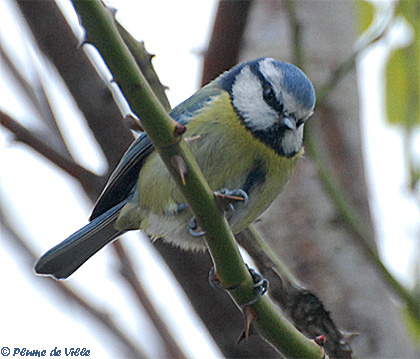 Male or female? There is little or no difference in coat between the two.

Superb blue cap. What would rather mean male. It seems that males have a cap of a darker and brighter blue. Normally it is the male who looks for a place to nest and submit it to an expected companion.

It has a small blue line above the right eye that allows identifying it. 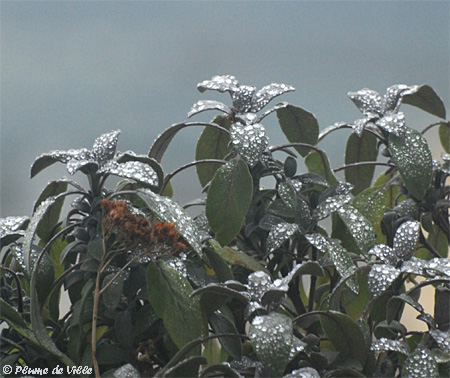 Perennial, it keeps company to pansies during the winter and protects them a little from bad weather. Its dark leaves are beautiful and good in winter as in summer. Small blue-violet flowers in early summer.

A visit to "lac des Minimes" gave us a nice moment in the gloom. 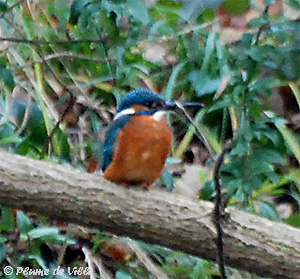 It perched for a moment over a small stream almost dry at this time of year, which feeds the lake.
Not very good the photos, taken from a distance and by grey weather, but at moment we do not dare move! Nor for the settings and even less to approach. Then it took off like an arrow into the trees. 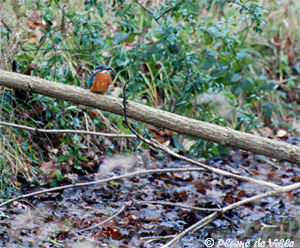 Bright colours, but it is not so easy to notice. This one perched a moment to show his brilliant orange belly but from a distance and under cover, it was not visible. Fortunately, it perched on a clear branch and appeared as a reddish brown stain the size of a starling.
They feed on small fish caught in water. It is essential to him that the river or lake does not freeze. Very cold winters are very difficult for him. 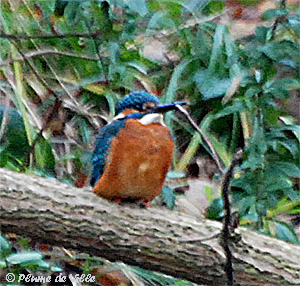 Greatly enlarging the pictures, it seems that it is a male. Its beak is black; the female has the lower part of the beak orangish.


It was also observed in Paris (where they nest) on the banks of the Seine and in some parks. 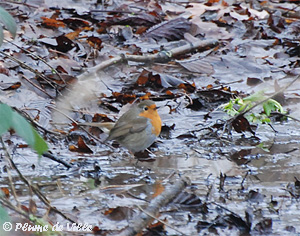 And as I like it before the frozen background, this is the European robin.


And the others ...
Many mallards, coots, moorhens, the pair of swans and 4 well developed cygnets, Canada geese, the Bar-headed goose that accompanies them, the two Common Shelducks, a half-dozen cormorants, 6 herons and, of course, black-headed gulls. Bands of chaffinches and blue tits and great tits. But no Slavonian grebes nor Common Pochards that were there in late November..
Le 12 12 3008. Lac des Minimes (Bois de Vincennes) . 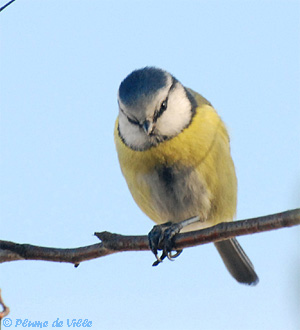 In recent days, the couple of blue tits has been increasingly present. That's a couple; they come together, he sings.
They remain set on the balcony. Often, one sticks a small head through the door of the nest box.

Yesterday, it was beautiful, sunny, a gentle temperature (11 °C) and, at 11 am, the first entry in the nest! We were not there, but the camera motion detection took pictures for us of this first visit. I hope that they liked the housing.

A small tour of one minute, with a lot of time hanging at the entrance. And a little "fan" (top photo) to have a good measure of the size of the flat (?).

These last days, time was a bit short to write this diary on a daily basis. Time passed also to make some preparations for the nest box camera.
The installation was amended this year and is still in testing. But the camera is activated and awaits visitors.

Very cold in recent days of the year, frosts, but often under the sun.
This morning, black ice. It's raining on the frozen ground under a gray sky. In late afternoon, a few snowy. 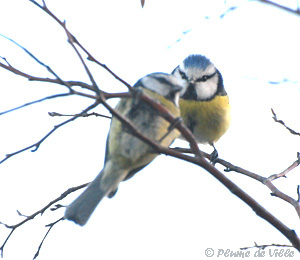 This is a couple that visits us.
Here, the 24, early in the morning in the sun, one near each other.
They spent a long time to fly from branch to branch and to seek a delicacy in the birch. 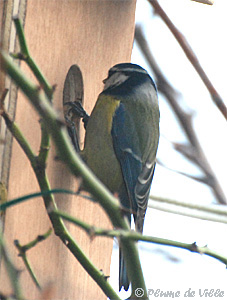 Since 23, no entry in the nest, just a few passages of a blue tit hung at the entrance.
As usual when it's colder weather there are fewer birds. The time is not fine to visit the homes. 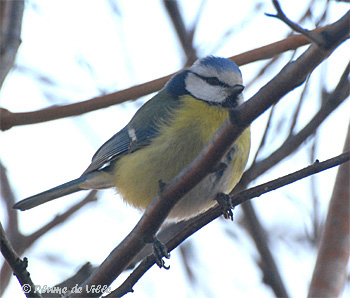 With the cold, the feather mantle is inflated 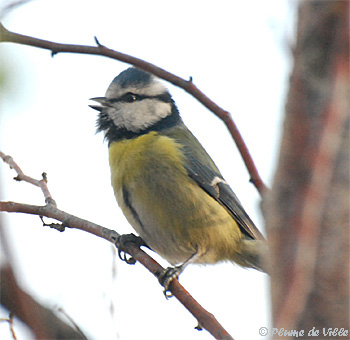 He sings from time to time when the sun is here.

One of the two tits is the same as the 16, one in blue eyebrow. Other photos show a small blue line over the right eye.

On 23, a visitor from another type. The common kestrel which visit my balcony is again passed through there. This time he left his portrait ... I will show it very soon.

Meet you next year!