A map for back-to-school. 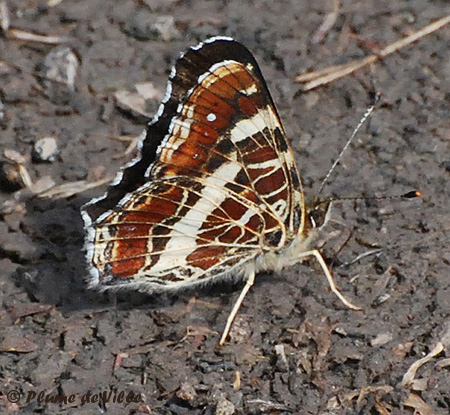 It has been a long time since  I wanted to see one.

And in the last days of August, I came across several ones, even in Paris.

This one has very obligingly posed, opening and closing the wings, turning to show its best profile. 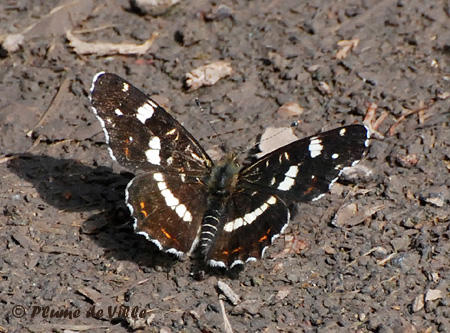 He donned here its black summer dress.
Two generations per year for this butterfly. This is the 2nd generation. (Form prorsa or summer)

The butterflies hatched in the spring have a completely different orange dress. I hope to show you this first generation one of next springs. (Form levana or spring.)

The livery of the butterfly depends on the conditions suffered by the pupae. These are the conditions of temperature and the length of day and night to determine these variations.

The underside is similar for two generations, but more or less white. 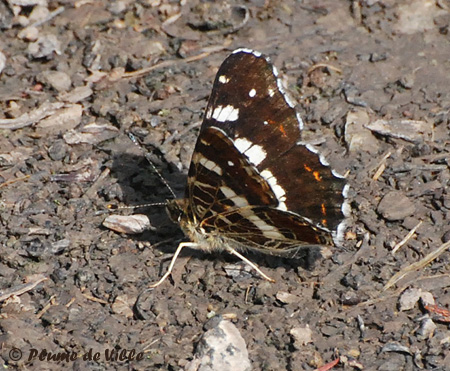 Another lover of nettles ... with four legs.

Only the last two pairs of legs allow him to walk, the first pair is atrophied in his nymphalidae family. 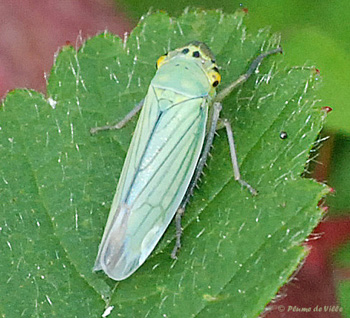 
Beautiful soft green for this female who jumps off as soon as you approach too closely.

They become more numerous in late August and September. 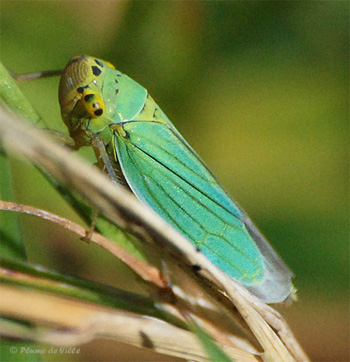 Beautiful, but they are dreaded sap-sucking pests.
It frequents meadows, woods and moist places.
In large groups they quickly weaken plants. 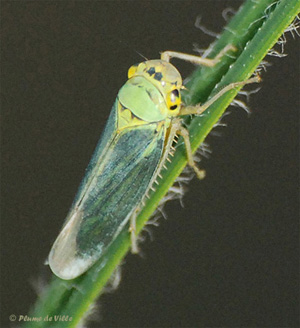 The underside of the abdomen is striped yellow and black 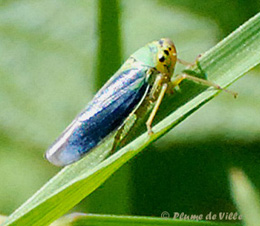 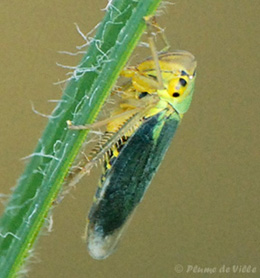 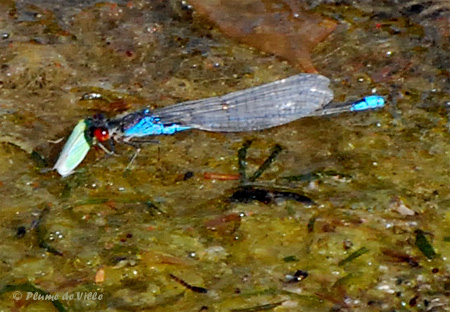 When they are frightened leafhoppers jump like springs on all directions.

But I wonder if this is not in a haphazard way.

Some have jumped directly to water. Whenever one of them lands on the water, this small red-eyed damselfly body, lying nearby, as they used to stand, fell over it. Only to go back, disappointed, leafhoppers are not edible? 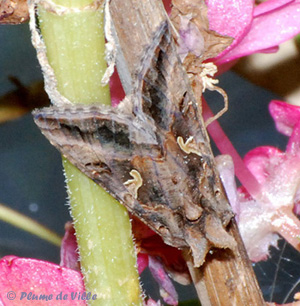 I disturbed it watering my plants.

It flew and it was very hard to find. It knows how to merge with its environment and its support. 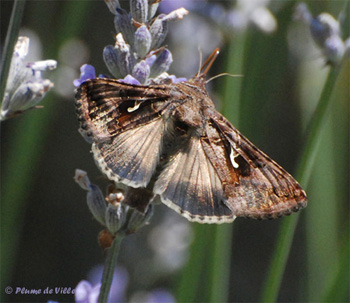 It is a migratory butterfly, of the moth's family. Moth but is also active by day. He was named Lambda Gamma or referring to its two silvery white spots. It goes to the North where it will lay eggs (several generations) and then back to south in autumn.

Here it is busy foraging lavender. 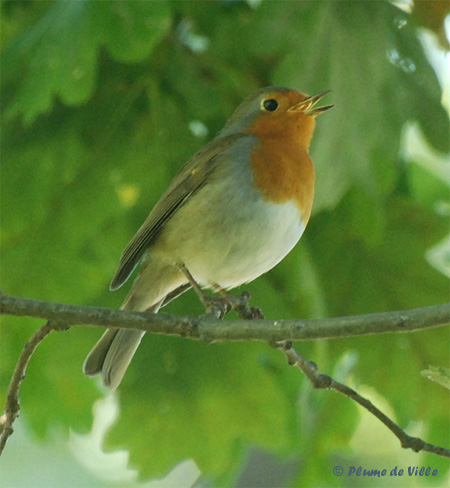 Always faithful to its territory, the robin is there indeed. It sings this September morning in little short and loud sentences. Two other ones, positioned in trees and bushes around him, return its "This is my territory"

From time to time some longer and gentle chirping. 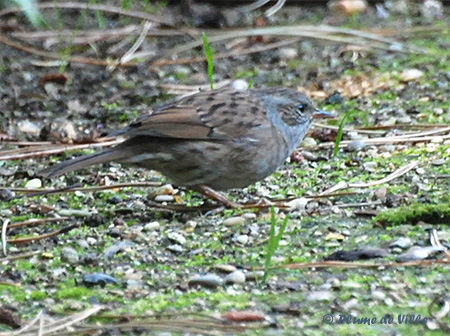 Ready to dive and hide under cover at the slightest alarm, the little Dunnock [Prunella modularis].

Dressed as a sparrow, he pecks looking for a good bite on the ground but remains cautious on the edge of the thicket. It raises the dead leaves and twigs and explores its territory at its calm pace, legs well bent.

So discreet that it disappears from sight as soon as it enters a bush and then it is very difficult to find and make out. I kept the same discretion by staying far enough away from it and it spent a long time walking his path. 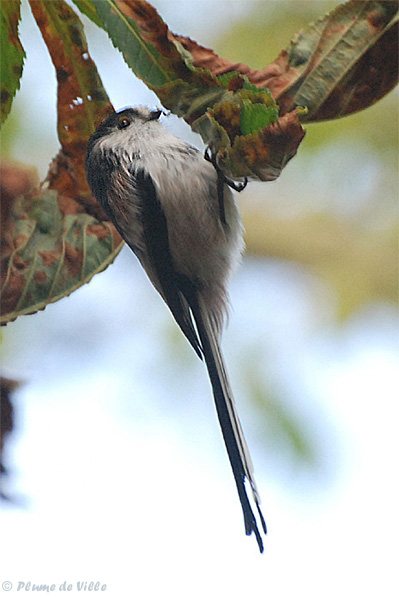 Here is one, then two, then three, then a good number, it goes quickly, counting is difficult ...

That day in September, they are more than thirty to start their little cry in rapid, acute phrases.

Everyone in the same tree, each looking very busy in the leaves. Then one left the tree and will explore the next and the next instant a second joined it and suddenly all the flight follows, one after another and landed in the new target. We see them pass, one, then two, then three, then ...

In the small band of Long-tailed Tits [Aegithalos caudatus] everybody talks at once and continuously.

They are particularly interested in the horse-chestnuts or conker trees (Aesculus hippocastanum).

Each of the little chickadee band quickly inspects each piece on all sides. Suspended by the legs, here it peak the leaves, extract a little something. Then a soft recovery and passes to the next sheet. 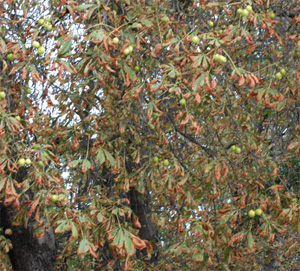 But the leaves of horse chestnut trees where they are installed have a very long face. 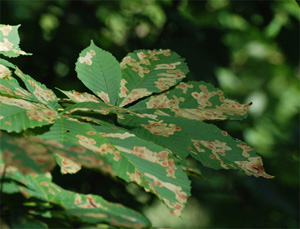 Since June (photo at left was taken at the end of June) the horse chestnuts begin to take this appearance with broad spots, as burned.


Their leaves will shrivel and fall.

The perpetrators? Here they are. The trees are attacked by the caterpillars of a small moth, Cameraria ohridella or the horse chestnut leaf miner. It is 3-5mm long, it is golden beige, striped with white stripes.

The trees are found in a deplorable state due to its passage. 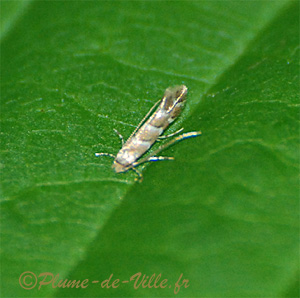 Here are the moths seen in spring when they emerge from their chrysalis (ph. 130509). They are found resting on leaves (still green!).

The female lays eggs on the leaves and once the eggs hatch, the larva enters the leaf from which it feeds internally. The pocket thus created is called "mine". Then the larvae pupate always its mine, in a cocoon. The chrysalis will pierce the wall of the sheet and the moth will emerge.

There are several generations per year. The latest generation of pupae spends the winter in the leaves on the ground. 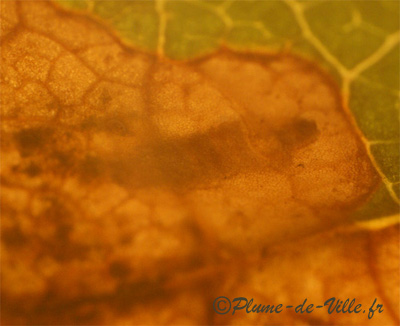 These caterpillars are leaf miners that settle in the leaf and eat the inside. We see one here by transparency in his box. 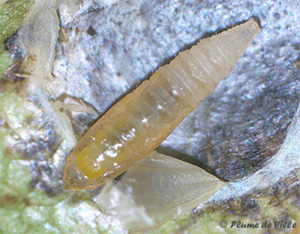 It is very likely (and so much better!) that our chickadees visit the horse chestnuts to remove and eat the larvae. 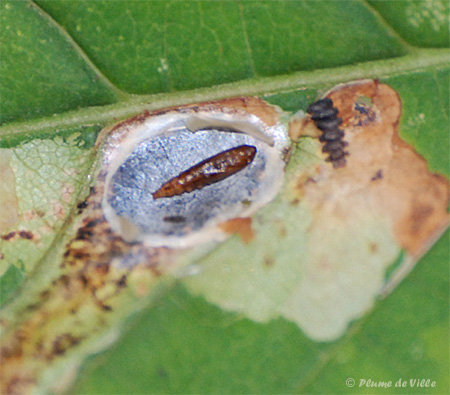 This is the inside of a leaf after opening a "mine" with the larva occupies it. 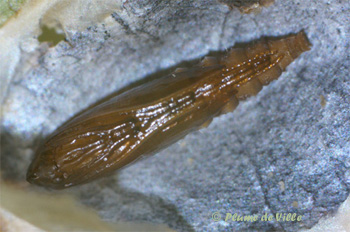 These photos were taken in Paris where Cameraria arrived in 2001. It is still present. 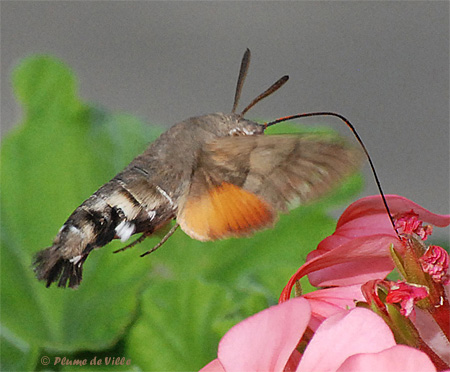 Again the Hummingbird Hawk-moth but this one was kind enough to be photographed lengthily.

Always in a geranium which he can safely reach the nectar with its long proboscis, witch here appears pink dotted with geranium pollen. 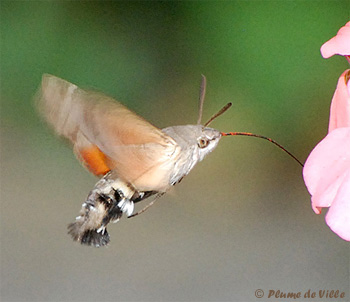 It stays very little time per flower. Once each flower explored, it went away. 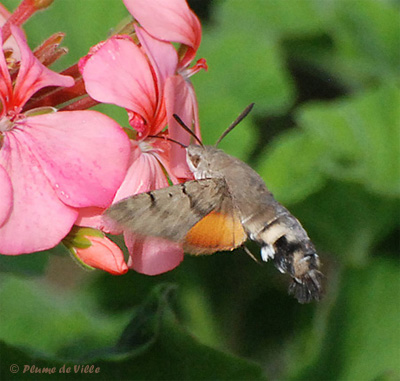 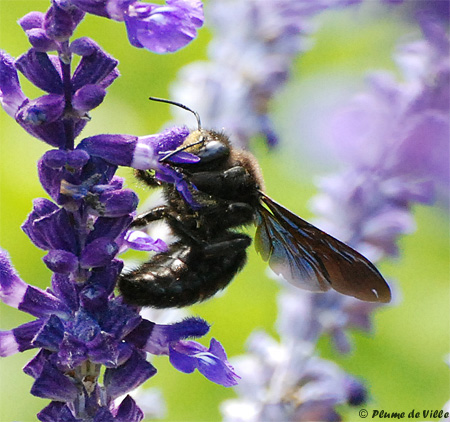 Roaring, impressive, all dressed in black, with blue-violet reflections from the right perspective, here is the carpenter bee Xylocopa or purple [Xylocopa violacea-Hymenoptera -].
Do not panic! It is absolutely not aggressive and we can contemplate at leisure.

It is a solitary bee that has beautiful "teeth".
One day several years ago, we were very intrigued by the mounds of sawdust and wood chips mahogany under a window on a wooden frame. The chips swept the next day the mound was bigger! Later and a big black bee came and slipped into a substantial hole in the wood of the window, hole leading to a beautiful gallery.

Our first meeting with the carpenter.

The wood in question was , the excavation was not really soft or rotten.
She dug to build galleries divided into boxes for each to receive an egg. No pictures, the owner of the window did not allow more ... 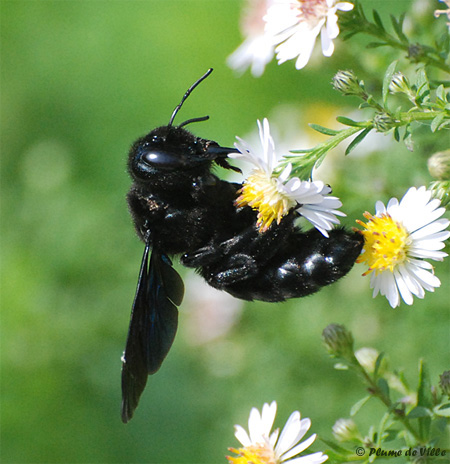 Here it is in full harvest of pollen to store in its galleries for its larvae.

I had not seen for several years but this year (coincidence?) I've met several in September. 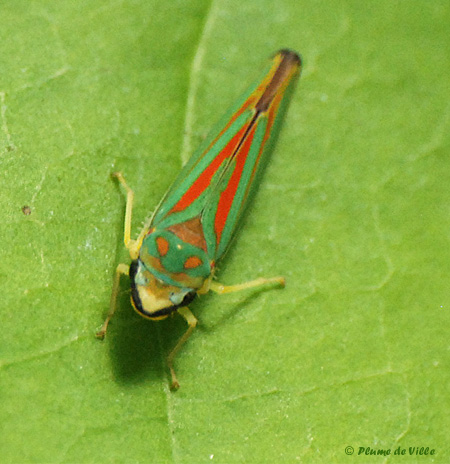 This small insect 8-9 mm to the pretty livery is another leafhopper.

It feeds on sap by piercing the plant. It is responsible for the transmission of a disease that causes rhododendron wilt buttons. 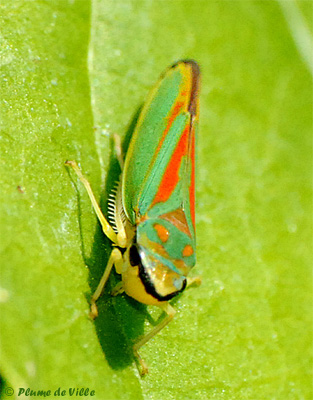 It is native to North America and was introduced in 1930 in Europe.